Usually I visit the Palais Clam-Gallas in Vienna’s 9th district close to the city center to attend occasional soirées of the alumni club of my former school, the “Lycée Francais de Vienne”, located just downhill of the Palais. As an art advisor who never sleeps, I have of course noticed the sparse furniture and the few paintings adorning the main rooms. Yet as these items were not for sale I have always rather directed my attention towards a good glass of wine and a chat with my friends.

The building has been home of the “Institut Francais” since the French Government bought it in 1951. You usually go there if you want to learn French, borrow a book from the library or attend a concert. Until now: The current owners are considering to sell it. When I was asked by a board member of my alumni club to give what might be a last guided tour of the Palais’ interior, I looked at the rooms more closely and my curiosity was piqued.

A bit of history

The ground on which the Palais stands belonged to the Dietrichstein family from 1690 to the mid 19th century and was first used as garden. Yet it was only in 1834 that Prince (Fürst) Franz Joseph von Dietrichstein commissioned the German architect Heinrich Koch to build him a summer residence there. The Palais was passed to the Clam-Gallas family by marriage in 1850.
As collaborator of the Belgian Architect Louis de Montoyer, who built a wing of the Albertina Palais in 1802, Koch’s style was a that of late classicism which wasn’t exactly “dernier cri” in the middle of the 1830ies, but was still appreciated as very fashionable by a wealthy bourgeois or noble family desiring a residence outside of Vienna, just like the Emperor’s Schloss Schönbrunn. In this context, we should remember that what today is the central 9th district was countryside in the 19th century.
Architect Koch was already well booked in the “provinces” surrounding Austria, the neighbouring countries like Bohemia and Hungary. One of his main clients was the Kinsky family for whom (among other commissions) he built their summer residence in Prague: 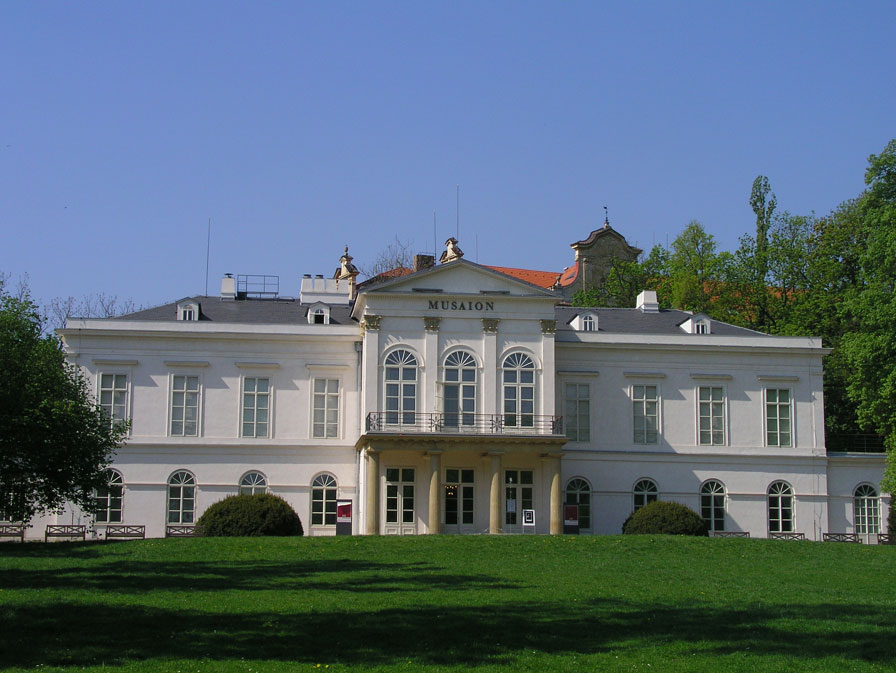 The result was successful, so the Palais Clam-Gallas was created in much the same style: 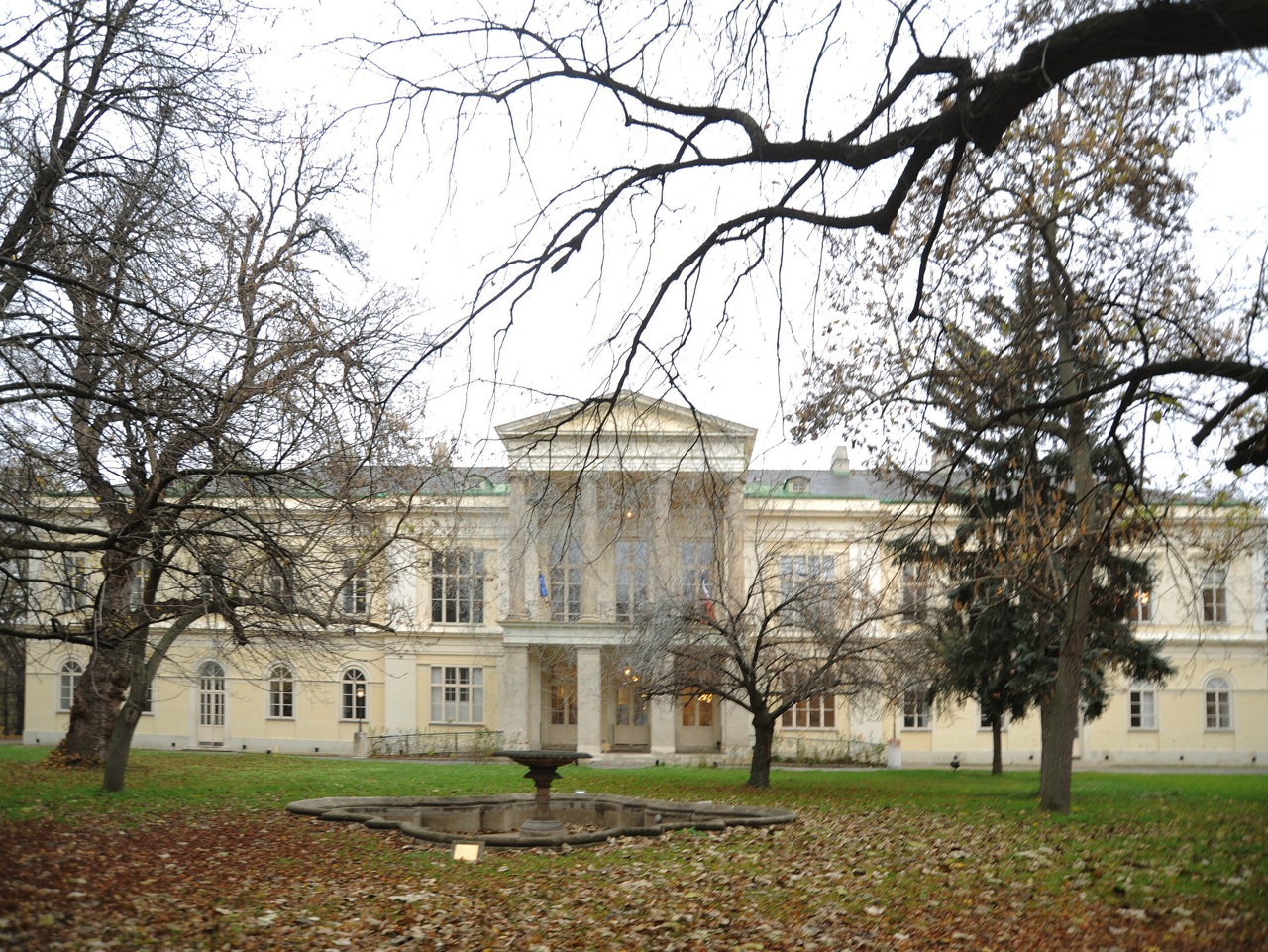 Yet: Renate Wagner-Rieger, the architecture expert of the 1970s (her books are still in use) called the Palais Clam-Gallas “one of the most important private palaces of the Viennese 19th century, surrounded by the most beautiful private park ran downhill to the area where the Lycee Francais was built in the 1950s”.

Time to look inside

The entrance hall of the Palais Clam-Gallas is all white and  divided into three parts by arcades, which, in their clarity of style mirror the outside of the building. On the left, two large columns border the stone stair cases which lead to the first floor. A little well, now filled with plants, used to be surrounded by a winter garden in the past. Is there anything left of the original furnishing? When I first visited the Palais, I was hoping to find some original pieces by Heinrich Koch, who, like many architects of his time, was also an interior designer. However, I was to be disappointed from the first minute: most of the original furniture was taken by the Clam-Gallas family when the house was sold. Some pieces can be found in the French embassy in the first district, the whereabouts of other pieces are unknown.

Looking around the hall, I found a strange mixture of different styles: a beautiful Empire bronze candelabra with winged lions hangs from the ceiling, Louis XV style appliques (in best 19th century quality) are fixed on the walls and two huge Louis XVI style candlesticks on pedestals of marble complete this crossover of different eras. The Italian marble campana vase from the end of the 19th century on the right side of the room used to have a secret: a few years ago a safe was discovered in the pedestal, but of course it was empty.

At first glance, akind of time leap happens in the next room, which is now used as media library. The wooden cassette ceiling with the bronze candelabra is reminiscent of the German and Dutch 17th century. Rooms with this type of ceiling were used both for living and more sophisticated, for representation purposes. Wooden decorations of this kind were also quite popular in the 19th century: They gave a rustic charm especially to residences built in the countryside. No one could tell me the exact function of this room. It is one of the biggest rooms, located at the center of the building. I was told that the portraits of the ancestors of the Clam Gallas families were exhibited on the walls. With this decoration the inhabitants of the Palais followed their noble tradition and their need for representation. Which makes evident to me that its purpose couldn’t be exclusively private.

The small room on the left, which was always used as library,was furnished with its Biedermeier interior a little after the Palais was built. Yet I was really surprised by two baroque doors leading out of the library on the left. There was even another pair at the other end of the house. Their supraportes look very much like a creation by one of the descendants of the German painter Philipp Peter Roos alias Rosa da Tivoli: sheep, goats, shepherds in a landscape with obligatory ruins. But what are 18th century doors doing in a 19th century house? In fact, it wasn’t uncommon to reuse materials from older buildings in newly constructed edifices. One famous example of reuse of such spolias is the Gloriette in Schönbrunn, which was nearly completely rebuilt from elements of the mannerist castle “Neugebäude”, in the 11th district in Vienna. Unfortunately, no one could tell me, from where these doors had come from.

We now take the main stone stair cases in the entrance hall to reach the more representative rooms on the first floor, today known as “Salon beige” and “Salon rouge”. I picture the many concerts and balls which were given in the rooms after the 1850s. Curtains and furniture were held in heavy red velvet, many palm trees were scattered throughout, patterned large carpets were in fashion then, giving the rooms a touch of oriental flair. Maybe even the rich parquet by Michael Thonet was uncovered to allow the guests to glide easily over the floor in the rhythm of the Viennese Waltz tunes.

The times are changing: During the World war II the house was occupied by the Russians, who were prevented from plundering the inventory because they were told that the Palais did not belong to a private family but to the Austrian State – and that, if they took a piece out, they would get into a big trouble. The Americans, who followed, even organized fashion shows in the park. Yet otherwise, of course, these were hard times, with the war raging right outside – and sometimes even inside: If that was the case, the only way to escape the building, was through the secret passage at a hidden place of the house.

The present  owner bought some antique, rather mismatched furniture after the purchase of the Palais, like the baroque clock from Dresden in the corner beside the Austrian book case from the 18th century, or a tapestry or a mirror with the emblems of the wide-spread family of the past owners.

The mystery of the contrasting styles

Yet even in this half-empty state, you get an idea of the past splendor of the house: fortunately the two huge Bohemian crystal candelabras hanging from the ceiling in each room and have fortunately not been removed, fine guilded ornaments dance on the wall and on the ceiling in best rococo manner. In my opinion this didn’t just happen by accident: the rococo style was pulled out from oblivion in the mid 1830ies, with the start of the reign of Emperor Ferdinand I, son of Franz I, who on the contrary, was well known for his sobriety. This so-called 2nd Rococo helped to link the imperial family to the importance and tradition of its ancestors. The position of Ferdinand I, who was  said rather to be weak (In fact he had many talents), was emphasized through external representation. This is also the reason why many noble families kept using the “oldfashioned style” even after the fashions had changed. 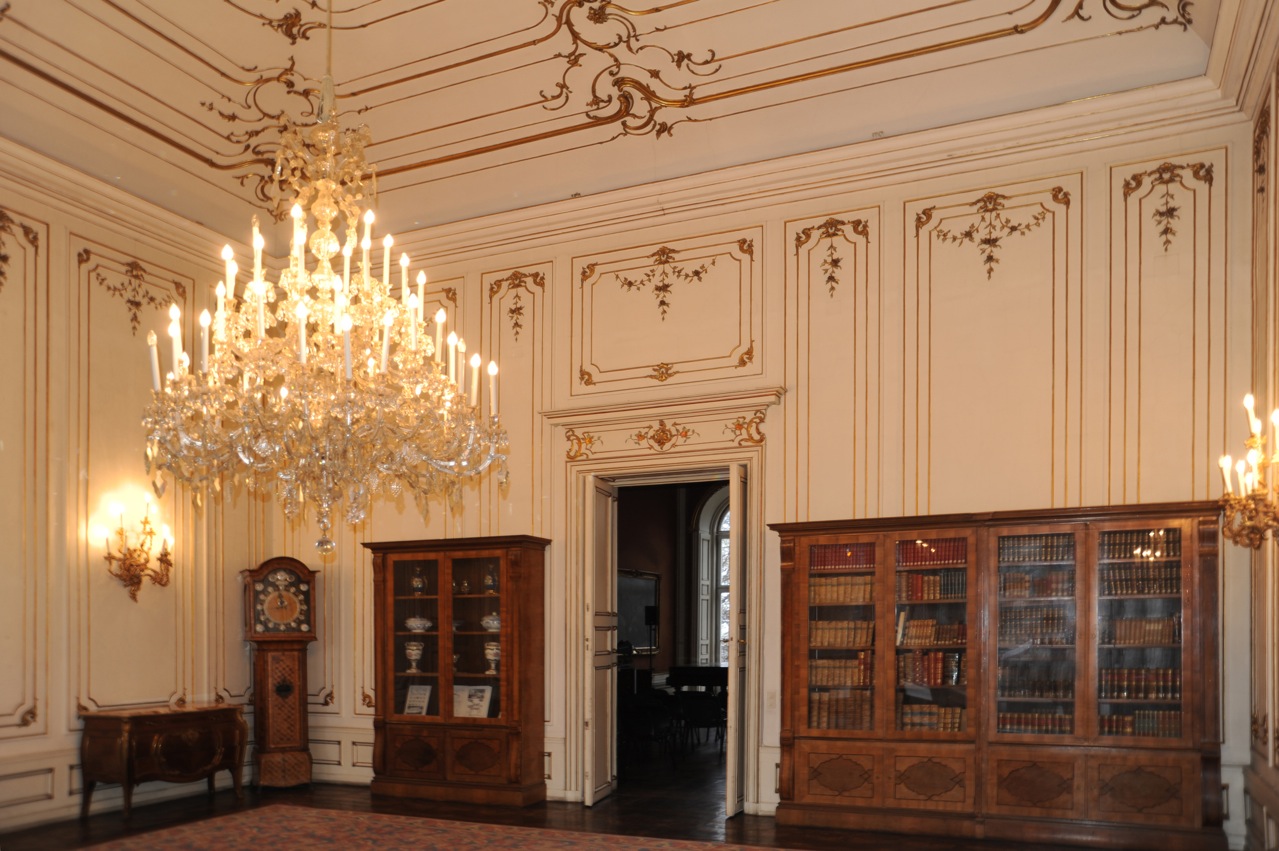 The destiny of the Palais Clam-Gallas is still uncertain. For me, this visit was an interesting journey through a house full of history and unexpected surprises. I hope, I have managed to share a bit of my experience with you.

These quick shots of the interior were a favour from Ingo Wessely. If you want to know, what he really does, have a look at his web sites: