I was asked to advise on an inheritance formed by a collection of nineteenth- and twentieth century- Dutch paintings and works on paper, porcelain and glass. Among the paintings was a so far unrecorded beautiful small landscape with houses by the Dutch artist Jan Theodoor Toorop (1885-1928), 28 x 35 cm., signed lower left. Painted with thick impasto, a sandy (pinkish colored) road leads to a village. Two trees stand behind a low stone wall. Sunlight comes from behind the houses. The vertical brown brushstrokes in the middle represent the bushes and enhances the painting’s depth.

In two valuation reports this painting was recognized as a study on canvas and the annotation on the lower right on the painting as well as on the two notes glued on the back could only be partly read. But actually, quite obvious, the painting is not a sketch on canvas but an oil on panel. The present scene is painted in an impressionist manner, as a quick impression. This approach was an example of the innovative ideas of other artists like the Belgian Theo van Rijsselberghe and the French painters George Seurat and Paul Signac.

Many of Toorop’s paintings from his Brussels’ period are executed in a technique in which the oil paint is thickly applied with a palette knife, as can be seen in the present painting as well. Toorop adopted this technique from the Belgian painter James Ensor, whom Toorop often met in the years he lived in Brussels (in 1885 Toorop joined Les Vingt, a group of artists exhibiting together in Belgium, who all shared a common interest in symbolic painting). The annotation on the lower right of the painting reads: “Je certifie que ceci est du J. Toorop/ G. v. Strydonck”. Thesame inscription was written on several other of his paintings, as for example on his Selfportrait in the collection of The Stedelijk Museum in Amsterdam, dated 1884. Guillaume van Strydonck was a professor at the Academy of Fine Arts in Brussels until 1884, where Toorop studied. The technique as well as the annotation contribute to the believe the present work can be dated to circa 1884, early in the artist’s career. Many of his early works are in major Dutch museum collections (for example; The Sea, dated 1887, is in the Rijksmuseum in Amsterdam). 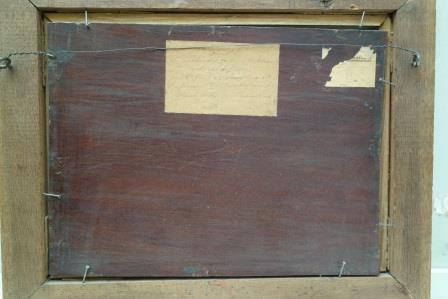 Regarding the provenance, a note glued on the back of the panel, reveals some letters of the word Kleykamp, which refers to Koninklijke Kunstzaal Kleykamp, a gallery in The Hague where exhibitions with Toorop’s work were organized in the 1920’s and 30’s . After my correspondence with Gerard van Wezel, author of the forthcoming monograph on the artist, he decided he will include this intriguing work in the catalogue raisonné. The painting itself will turn up in auction this year. Hopefully the new owner will have the old varnish removed and the painting properly reframed to preserve and present it for the future.

Wendela Wagenaar-Burgemeister is an art historian, valuer and restorer of paintings working for an established Art Gallery in Amsterdam. She is also an independent fine art broker and advisor. www.burgemeisterfineart.nl