Franz Marc had complicated dealings with his Blaue Reiter colleagues, particularly August Macke, but also Gabriele Münter. Marc, who, from the moment of his introduction to Wassily Kandinsky in 1911 captivated the Russian painter, was for the most part cordial to Münter, who resented Marc’s demands on Kandinsky’s attention and time. 1)
Münter commented on Marc’s outsize presence with little subtlety in her painting Stillleben mit heiligem Georg (1911), a psychological cornucopia showing St. George, the emblematic patron of the Blaue Reiter, astride a hobby horse, an ineffectual tchotchke on a mantel strewn with wilting flowers, a glazed rooster, a childlike figure in a dark hat, and a crude rendering of Marc’s Badende Mädchen (1910) on the murky green wall beyond. Münter’s sideswipe was not lost on Marc, who groused about the insult to Macke in a letter and to Münter directly in a tense confrontation. 2) 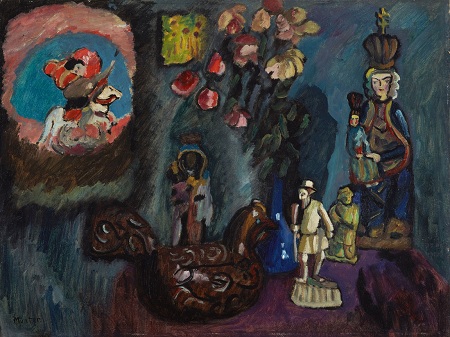 In 1912 Marc and Macke also had several heated arguments, first over Marc’s dismissal of what Macke considered his greatest painting, Die Lautenspielerin (1910), and then over what Marc deemed the ethical shortcomings of Robert Delaunay, whom Macke adored. Recognizing in himself the same propensity for drama he’d scoffed at in Münter, Marc reflected on his own impetuous behavior. 3)
Marc’s Blaues Pferdchen, Kinderbild is inscribed to Macke’s toddler, Walter. Marc sent it as a greeting to the Mackes in spring 1912 as August and his wife Elisabeth learned they were expecting their second child. Against a hectic background of yellow and red outcroppings a solo blue colt – Marc’s avatar – braces his hooves, alone in the landscape. The small creature’s legs are arranged in the manner of a child’s rocking horse, deliberately echoing Münter’s irreverent pony. 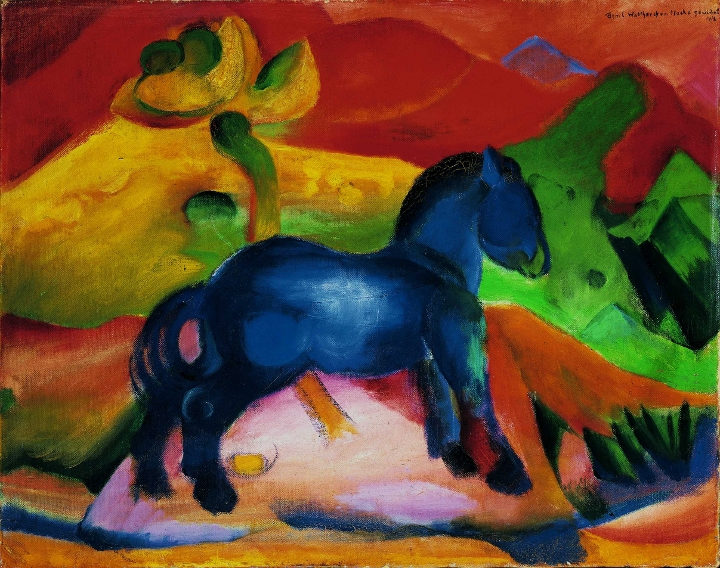 This card is Marc’s conciliation to Macke. “The Blue Rider is only a toy, a temporary phase, like childhood,” Marc seems to be saying to Macke. “And it is me who has been childish. You are more important to me, and without you I am alone.”

Jean Marie Carey is PhD candidate in art history and Germanistik at the University of Otago, Dunedin. Her research concerns the avant-garde painters, particularly Franz Marc, and how they intersect with contemporary art. Carey has a masters degree in information science and works as a lecturer and archivist, dividing her time between New Zealand and Bavaria.